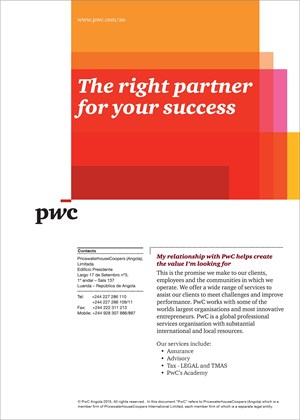 PwC firms help organisations and individuals create the value they’re looking for. We’re a network of firms in 157 countries with more than 195,000 people who are committed to delivering quality in assurance, tax and advisory services.

We are one of the largest professional services providers in Angola, offering audit, advisory and tax  services. We are recognised for the quality of our services across a wide range of clients, including banks and other financial institutions, industrial and service companies, as well as government and public administration and number of multinational clients.

PwC combines its profound local knowledge with that of the global network in order to provide its clients with world class and distinctive professional services.

Our services in Angola are led by seven locally-based partners: three in audit, two in tax and two in advisory, supported by 160 staff, of which 115 have Angolan nationality. Our team includes staff with considerable experience in offices from around our network, including Harare, Johannesburg, Lisbon, London, Oporto, Maputo, Paris and Rio de Janeiro, and were educated in universities in Angola, Namibia, Portugal, South Africa, United Kingdom and Zambia. Most of our staff have degrees in Accounting, Economics, Finance, Law, Management or Social Sciences. They receive continuous training in relation to specific business sectors, business and soft skills, risk management and taxation, all managed by the firm in Angola.

The firm in Angola uses the same methodologies and technology used by all firms across the PwC network, and follows our global Code of Conduct, not least in respect of the behaviours and ethics expected of staff and partners around the world.